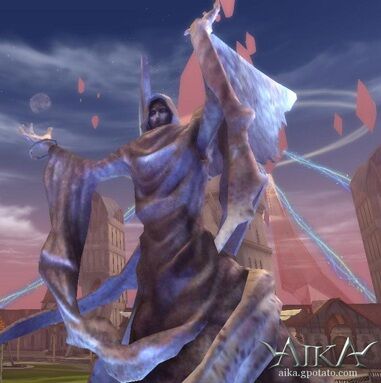 The Saga of Arcan[edit | edit source]

Before time began, the great goddess Aika created the land of Arcan, a world she hoped would become a utopia for all who inhabited it. To people this gentle land, Aika fashioned the Scinic, a kind and just race who cared for Arcan and preserved the harmony with which the Goddess had infused their birth.

After three centuries, however, the Scinic grew restless and disenchanted with the complacency of their existence. The Scinic elders blamed Aika for the lack of purpose which gnawed at the very core of their society, corrupting the goodness which lay within them. They wished only to sleep under Arcan’s fertile ground until a time in which their lives could have more meaning, a request the Goddess granted, albeit sorrowfully.

Aika, in her wisdom, recognized that she had failed in her first attempt to create the perfect creatures to live in harmony on the world she had brought out of nothingness. She set out to correct her error in the genesis of the Humans, a race whose inherent balance of good and evil would inspire the meaningful struggle which the Scinic had so sorely missed in their peaceful lives. Human civilization thrived, but soon Aika learned that her second creation was also flawed. Arcan, her first and most precious creation, was quickly becoming overrun by Humankind’s hatred and destruction.

Angered and embittered by the Humans’ excesses, Aika vowed to create a race which would cleanse the land of its defilement. It was in this unhappy state that she conceived the Zereca, a race of arbiters to act as judge, jury, and executioner for the Humans. She desperately imbued her third creation with fragments of her own limitless essence--the better to overpower those whom they were destined to preserve or condemn. The Goddess released the Zereca upon Arcan... and prayed.

The Retreat to the Sky[edit | edit source]

Aika grew weary from her many efforts to devise a faultless world. She watched, horrified, as the Zereca ran bloodthirsty with power, bringing the Humans close to extinction and forcing them to hide in fear. Filled with remorse, she realized that there was no hope for the Zereca, a race created in anger, and that she must somehow shield the Humans from impending doom. She called upon the Great Prophet Giovanni of the Humans to command a mass exodus to the region of Lakia. With her remaining power, she lifted Lakia and the survivors upon it into the sky, away from the predations of the Zereca. Heartsick and spent, Aika fell into a deep sleep, and the fragments of her own power within the Zereca caused them to share her slumber.

Three hundred years have passed and the Humans have prospered upon Lakia, the land of the sky. Trouble lurks across the horizon, however, as both Aika and the Zereca have begun to stir from their repose. The Zereca, although still in a weakened state, have already begun to spread darkness over Arcan in preparation for their full awakening. In response, Aika has commissioned her own chosen emissaries among the Humans--a class known as the Aitan --to protect their race from harm. She has further created Pran , fairy familiars with elemental powers, to aid the Aitan.

And so begins Aika’s awakening, and the final war for Arcan...

After the Aitan effort to cleanse Prison Despero, Lakia was shocked to discover that Alan Sinclair was actually the Zereca demon Apos. After a vicious fight, the defenders of Lakia beat back Apos and forced a retreat. But all was not well. The corruption of Horma had spread to deeply and penetrated the Caelium core that holds Lakia afloat.

Recognizing the real possiblity that Lakia could fall back to the surface of Arcan, the Lakia Congress sent forth expeditions to find other islands suitable for colonization. One such expedition -- led by Captain Roberto Dawdric -- came upon a frozen island. At first, the captain was prepared to pass the island off as unsuitable, but further inspection led to the discovery that this island was previously inhabitated. Captain Dawdric had rediscovered the island of Traband.

But Traband was supposed to be a temperate island, not the frozen wasteland before him. As he led his expedition further into the core of the island, spirits dropped and hearts were chilled as the extent of Traband's corruption was witnessed. A massive Zereca construct had been placed above this land. As Lakia had fallen prey to Horma, so Traband was defiled by Skadi. Dawdric turned his expedition home to report this news to the congress.

As soon as word made its way home, both the Lakian Congress and the Lord Marshal agreed that this Zereca threat must be confronted to ensure that Traband didn't share Lakia's fate. Shortly thereafter, a foothold was established in the ruins of the city Epheso, in Traband. What the Aitan didn't know what that the corruption of Skadi affected more than just the weather and creatures of Traband. Skadi's immense power acted as an anchor, joining together the fractured dimensions of Arcan. There were not enough resources to support 5 full Lakian armies, and soon allies became enemies, fighting for an upper hand in this new harsh land.

A new chapter in the history of Arcan is ready to be written. What part will you play in it?

The descent has started...

The Zereca plot to bring down the sky islands, the last sanctuary of humanity, has been a terrifying success. The demon construct Horma has already corrupted the Caelium core that keeps the capital island of Lakia aloft. Skadi has stolen the energy of Traband's Caelium core, turning it into an icy wasteland, and Apos himself has mined out the core of the emerald island of Karena. The islands are descending. The Aitan must now descend as well to create a safe haven for humanity on the demon controlled planet.

As Humanity returns to Arcan, its fate rests with you. No longer are you fighting corrupted creatures, now you must face the Zereca directly. Prepare yourself; the fight for the survival of the human race begins in AIKA Epic III: Descent.

The Return to Arcan[edit | edit source]

The former homeland of all life, Arcan is now a demon twisted wasteland where death awaits at every turn. Aitan will be able to explore this new land for the first time, but will have to face monsters that have never before been seen. A new dungeon offers perilous adventures, where brave Aitan will face off with Apos in his own domain.

The Battle for Desepheron[edit | edit source]

Settling a new land is a challenge in and of itself, but settling a land as corrupt and used as Arcan, with five dimensions worth of humans presents a whole new level of tension. The nations will fight for precious resources on the surface in this new World PvP System, in order to make sure that their dimension survives life in these troubling times.

Aitan will have to become stronger than ever to survive on the surface of Arcan. With Epic III, players will now be able to reach level 85. Each class will find new skills at their disposal in addition to being able to wear new powerful gear.

With the war against the Zereca taking a turn for the worst, new Aitan must be prepared for the ferocity of battle, not just against creatures and demons but the Aitan from across the rift. This won't just be a fight against other people and monsters, as you must survive deadly obstacles to make it through training and claim your reward.

Aitan from all over the world can now enjoy Aitan Arena throught the day with 7 chances to participate starting at 3 AM and ending at 11 PM server time! You can also earn new titles and rewards for participating in the revamped Aitan Arena!

Retrieved from "https://aikaonlinena.fandom.com/wiki/Storyline?oldid=6585"
Community content is available under CC-BY-SA unless otherwise noted.