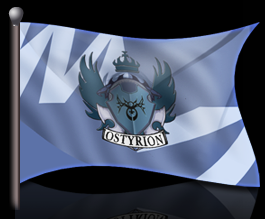 
Driven by bloodthirst, the nation of Ostyrion is not for the faint of heart. Ostyrions lust for the kill, no matter how unfair or immoral the fight may be, and they do not hesitate to double-cross each other on a whim.

They don’t trust anyone, but may band into packs to prey upon others who are weaker or bear riches. Other than these ad hoc formations, Ostyrion tends to lack significant organization in the form of stable guilds, parties, etc. The quasi-feral nature of this nation means that only the most callous and rapacious will thrive.

Ostyrions are famous for believing that they are all the most skilled fighters in the world, an opinion they have no qualms about proclaiming far and wide. They possess no national pride, with the exception of looking down on the citizens of other nations more than they look down on each other.

The citizens of each Nation determine the type of environment of the Nation. Above is a description of Ostyrion from the developers.

Retrieved from "https://aikaonlinena.fandom.com/wiki/Ostyrion?oldid=5854"
Community content is available under CC-BY-SA unless otherwise noted.