Each nation may currently possess up to 14 relics (number changes periodically at GM discretion) and the effects of the relics only affect citizens of that nation (or official allies) while those players are in the nation. The effects do not carry with players to other nations.

Relics are placed in one of 4 special protective structures located in Lakia called Temples. The 4 Temples are: Amarkand Temple, Tabazra Temple, Algon Temple, and Kynari Temple. The World Map (click "U" to view) shows the number of relics and their locations.

There are a few lines of defense that invaders must defeat before gaining access to a Temple's relics. Defenses include Temple Guards, Guardian Stones, and the Monolith, the dark purple stone that houses the relics. The Monolith can only be accessed when all three Guardian Stones have been defeated. And if a Temple is under attack, a message will be sent to the entire Nation alerting them to the situation.

After capturing a relic, the person will have a distinct glow and must get back to their own Nation and place the relic in a Monolith. This means they must evade the players of the Nation they are invading, elude the guards on the path back to the Rift, and make their way to their own temple without being killed.

If the player carrying the relic is killed, the relic will drop to the ground in a treasure box. Anyone from either Nation can grab it at this point. If the relic is left on the ground for 1 hour, it will automatically move back to the Temple is came from.

After a relic is placed in the temple (capped), a message will be sent to the player's Nation and the player's name will be shown in the Temple Information next to that relic. 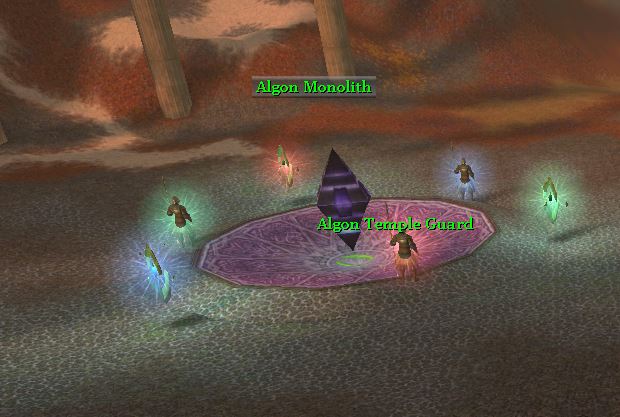 Once a relic is secured in a Temple, the Lord Marshal has the option to upgrade them which will yield greater benefits to the citizens. Players will then have to go to Theletar Timur, located in the central Regenshein area, to donate items for XP or Caelium Ore fragments toward the upgrade. Player's are rewarded with XP or other items for their donations.

The Caelium Ore is not a drop from a regular mob. Instead, its a special NPC that spawns in Verband, Amarkand, and Tabazra Desert. You have probably seen them around your Nation, but only the ores from enemy Nations can be harvested. You must attack it as you would a mob to crack it open. After "defeating" it, you will either get nothing, receive fragments, or get an entire ore. If you get an ore, it will automatically be sent to the Nation's Altar. If you get some fragments, you may exchange them with Thelatar Timur for rewards.

If level 3 relic is placed in another Temple after being raided, its level drops to level 2. Therefore, after upgrading a relic, its important to defend it! It takes a lot of Ore, XP, and gold to upgrade them and you don't want your efforts going to the enemies or to waste.

Retrieved from "https://aikaonlinena.fandom.com/wiki/Holy_Relics?oldid=15150"
Community content is available under CC-BY-SA unless otherwise noted.